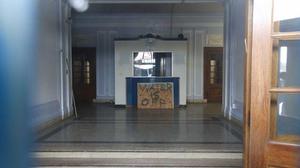 Newsday printed an article about our recently purchased building in Glen Cove where our middle school will be moved/located after renovations are complete.

The nonprofit Tiegerman schools is purchasing the closed Coles School and will pay for more than $3 million in renovations, officials said.

A nonprofit that serves children with language and autistim-related disorders will move its middle school to Glen Cove from Queens next summer, officials said.

Tiegerman schools expects to close on its $2.1 million purchase of the shuttered Coles School from the city of Glen Cove next week, said Brad Gerstman, Tiegerman’s Garden City attorney. The Glen Cove City Council approved the sale in December.

Tiegerman will pay for more than $3 million in renovations to the school – including a new heating and cooling system, and windows – over the next 11 months, Gerstman said. The middle school will move from a leased building in Woodside, Queens, to Glen Cove in time to begin summer school classes in July 2019, he said.

Ellenmorris  Tiegerman, the nonprofit’s founder, said in a statement the Queens location does not have a gymnasium for physical activities and lacks an auditorium for concerts and other events.

“The Coles School will provide us with a chance to reinstate these programs and provide our students with an enriching education that includes not only academic instruction but Creative Arts Therapies,” she said.

Tiegerman has state approval to serve 156 middle school students with developmental disabilities, Gerstman said. He declined to say how many students the school enrolled in the past school year and how many are from Long Island.

Tiegerman has had its central offices in Glen Cove and since 1999 has operated an elementary school at the former South School in Glen Cove. The nonprofit’s high school is to remain in Richmond Hill, Queens.

The city purchased the roughly 4-acre Coles School property from the Glen Cove City School District in 2002 and leased it to a Jewish school until 2011.

Mayor Timothy Tenke said city officials had “wanted it to remain a school if at all possible” and the sale preserves a historic building that some potential buyers had proposed to demolish.

Glen Cove is retaining about 2 acres behind the school building that includes a field and a structure that currently houses a sports-training center.

The City Council on Tuesday approved easements and an agreement for the city to use the school parking lot on nights and weekends.

Tenke called a special meeting to vote on the agreements and expedite the sale closing so Tiegerman can begin renovations, he said.

The vote was 6-1, with Councilwoman Marsha Silverman voting no. She said in an interview she supports the school but did not receive the documents related to Tiegerman until the afternoon of the meeting.

“In order for me to be able to do my job appropriately I need to be able to review the documents and have full information before I’m supposed to vote on it, and I did not have that information,” she said.